decided to check out this neighbourhood since my bestie passed her driving!! 🙂 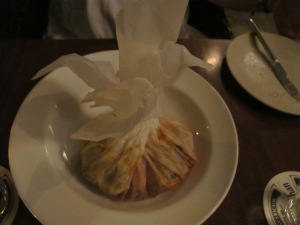 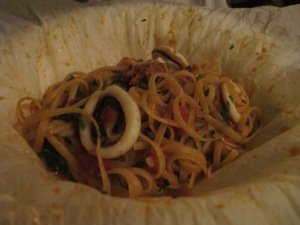 close up of what medium rare pork medallion looks like

1. The scallop appetiser was really something different from the usual in a good way, if you like creamy sauces 🙂 Scallop was well cooked => not too raw that it is too mushy and not too over cooked that it tastes like rubber.

2. Mains:
Seafood linguine was really flavourful. The sauce was not too saltish and overall had an impactful seafood flavour. Linguine was al dente and seafood was really fresh and plentiful.
Pork Medallion : the first time that I am eating it medium rare – I always thought pork should be cooked till well done . It was really succulent and didn’t have that raw porky after taste. This cooking style was recommended by the friendly waitress and no turning back for me.

3. Desserts:
was really just nice to share after the filling mains 🙂 . Crispy on the outside, molten in the inside 🙂

4. Others:
For one, service here is very good. We did not have a reservation but the waitresses and waiters attended to us very quickly and keep coming back to check in on our progress throughout the meal.